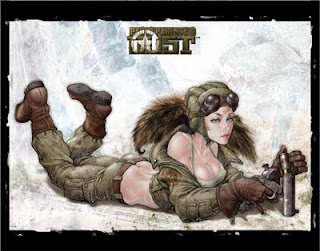 Greetings , and welcome to part 2 of my ramblings , musings and other such thoughts on Dust Warfare .
Today my Revised Core Set and Medium Allied Walker landed in my mailbox , much to my glee . It's like being a 10 year old at crimbo all over again ! I'm mighty impressed with what you get , so time to give a review !

Whats in the box ?

Not bad , not bad at all . These models are currently only available in the Core Set , but should hit the shelves as a purchasable separate squad at a later date , if the Original Core Set is anything to go by . 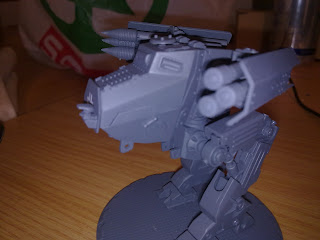 The 2 Walkers in the Starter come in exactly 3 pieces , the main body and legs and 2 weapon "arms" . The detail is pretty good , equal to a Imperial Guard Sentinal . It's larger than one though , about roughly the size of a Space Marine Drednaught . There are some mould lines that need to be removed , and one or two gaps in the body work that could be filled if you so desire . But their ready for the table straight out the box . Both factions come pre primed in separate colours , the Axis in a grey and the Allies in green . How this reacts to paint , will be my next blog . Hopefully . Work is a killer sometimes ...

I managed to get an Allies Medium Walker separately , and it's as detailed as the Lights . It comes with all the parts needed to field the 4 options available in the army list supplied in the rule book ( Mickey , Hot Dog , Pounder and STEHL REHN ! Ok , the Steel Rain if you prefer ...) . There is a fiddly series of gaps to fill on the SR missiles , but well within most peoples abilities to remedy . 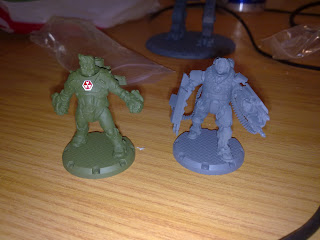 Here are the two Hero's included . They come pre assembled and primed . Not seen any mould lines on any of the other infantry , but expecting a few . The quality is not as good as GW's offerings , but at half the price , I'm not complaining !

However there is one item that needs some attention . 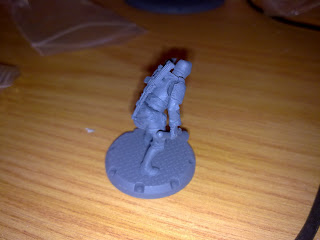 The Sturmpioniere models need some work around the hip joint , the halves not fitting flush . Doesn't look like too much of problem , but would of been nice to not have it !

So ends another blog entry . Stay tuned for my next entry , hopefully involving a game or two to see if the game delivers what I think it will !